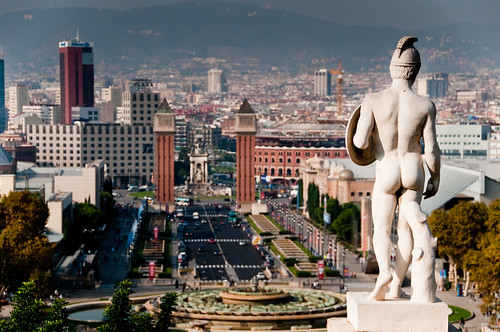 Spain borders Portugal‏‎ and France‏‎ and lies on the West of Europe. It is a large, relatively sparsely populated country (pop about 45 million) and attracts many tourists throughout the year. It has a diverse climate and can be cold in Winter in the North to semi-arid to Mediterranean.

The capital and largest city is Madrid (pop 3.5 million) with cosmopolitan Barcelona being the next major city. Obviously these bigger cities offer more opportunities for work.

During the recent economic crisis the country has suffered badly and there is a very high level of unemployment. This has meant that some private schools have had to close down and there is slightly less demand for English teachers than there used to be. However, Spain has one of the lowest English speaking populations within Europe so work is still to be found if you are qualified and are a native speaker and as the country recovers from the economic problems over the next few years this work will increase.

Requirements to teach in Spain

Some state schools offer bilingual‏‎ education to their students as do many nursery schools. With the right background teachers can get good work here. Each region of Spain has their own requirements for teaching in these schools so if this is of interest you should contact the local education authorities in the region to see what is available and what their requirements are.

Outside this are the private schools where most jobs are found. The requirements to teach in a private school are often less strict than a state school and they usually ask for a degree and a TEFL Certificate.

Because Spain is in the European Union‏‎ preference is given to teachers who hold a passport from the EU; this effectively means British and Irish teachers work a lot in Spain while there are very few from outside Europe.

Note, however, that the Ministry of Education run a program which allows teachers from the US and Canada to come over and teach for a year. About 2,000 teachers take part in this program annually – see MoE – Spain‏‎ for more details. A privately run program for European au pairs/teachers is also available.

Spain tends to close down during August (and is quiet in July as well) so there’s no point looking for work then. September (and to a lesser extent, October) is when the academic year‏‎ begins. Having said this, there are Summer Teaching Camps in Spain but these usually run off the back of schools who will offer the work to their own teachers first.

Schools mostly hold interviews at the beginning and end of Summer for new teachers. Many schools in Spain rely on teachers arriving on spec so there is certainly a chance to find work if you just get over to Spain, set yourself up and walk the streets for work.

There may be work available in the new year; some teachers will have left their schools and private individuals have made a resolution to learn some English!

Most work is at one of the private schools teaching General English‏‎, English for Tourism‏‎ or Business English‏‎. Often working for a school you will find the pay is fairly poor and you’ll be overworked, however if it’s your first year in Spain then this is a lot easier than having to go there cold and find private lessons through word of mouth.

The private schools themselves vary in quality. A great deal of emphasis is placed on the written word rather than spoken English. In class, the main issue is unmotivated students and sometimes you will have to work hard to get the students participating.