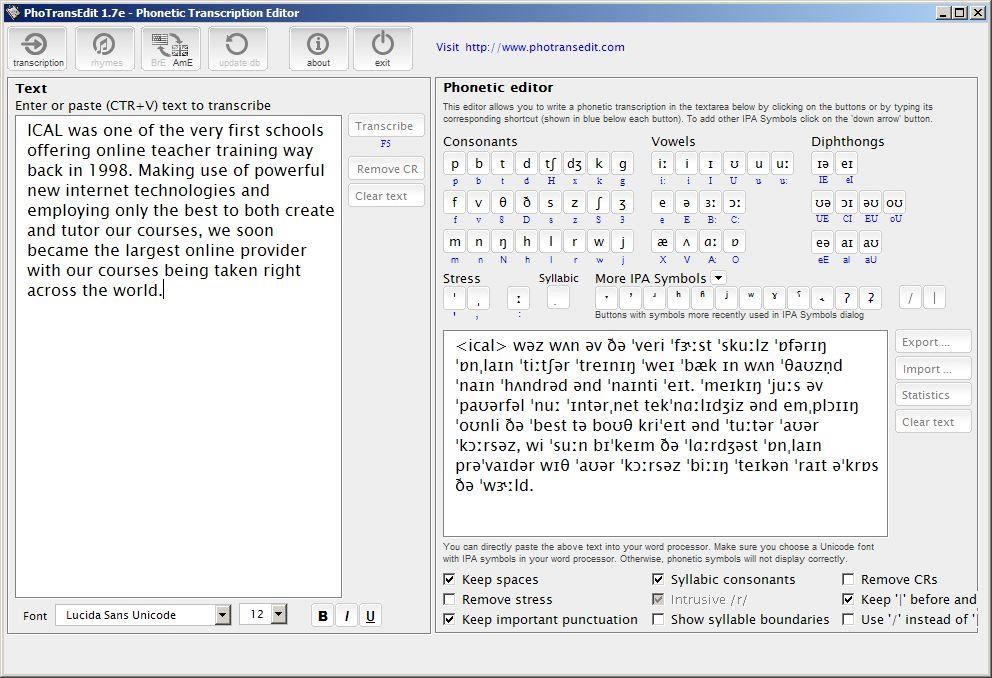 There are a number of programs and websites now which allow you to transcribe normal text into the IPA – International Phonetic Alphabet.

These usually have options for for both British English and American English‏‎.

Essentially you type a text into the program, click a button and each of the words is looked up in the appropriate database (AmE or BrE) and then “converted” to phonetic text.

The screenshot shows an example of this at work. Notice that certain words are not transcribed; this is because the software relies on a database of some 150,000 words and if the word you type isn’t in that database, it can’t be transcribed.

Although these programs do a good job, the output needs to be checked thoroughly before you use it in class as it is may not be 100% correct due to several difficulties, notably homophones‏‎ and differences in stress depending how a word is used in a sentence.

Bearing this in mind, the software is still a very useful tool for the teacher. It makes preparing phonemic texts much simpler and faster than transcribing by hand and the output can easily be pasted into a word processor, for example, for printing and handing out in class.

Note that although the resulting text can be copied and pasted into Word, by default some characters may not show as many fonts do not support the IPA; you can, however, install and use a font which does support all the characters (see the IPA article for more on this).

Where to Find the Software

The best standalone program we have found is called PhoTransEdit (the screenshot above was taken from this program) which is not only free but has plenty of bells and whistles and is very user-friendly.

The PhoTransEdit webiste also has an online version of the program here.

Alternatively there is a website called Phonetisizer which has another online transcriber, albeit with adverts.

IPA Decode!‏‎ – a game you can play in class to help students practice the IPA.