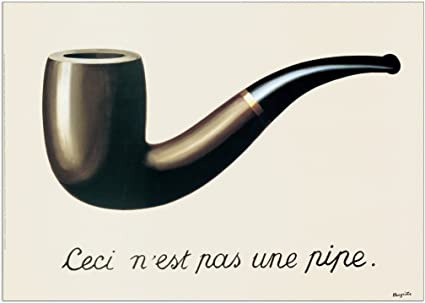 Painting by Belgian surrealist, René Magritte, entitled ‘La trahison des images’ (The Treachery of Images). Under a picture of a pipe, Magritte writes ‘Ceci n’est pas une pipe.’ French for ‘This is not a pipe.’

A Noun is one of the major parts of speech‏‎. A good, general, definition of a noun is that it is something which is used to name an object or thing.

There are literally thousands upon thousands of nouns in English‏‎ and we regularly add new nouns to the list. In the past few years these new nouns have come into English:

In English nouns are fairly straightforward and usually have just two forms: singular (i.e. one) and plural (i.e. more than one). In the majority of cases you just add -s to the singular to make it plural:

Look at that beautiful dog!

Look at those beautiful dogs!

For more on this see Singular and Plural Nouns‏‎.

In all the examples above the noun was a single word. We can also, however, use a phrase‏‎ in place of a single noun and it functions in exactly the same way. This is known as a noun phrase.

The man ate the cake.

The big man ate the cake.

We have taken a simple noun, man, and added other words to it to make a noun phrase which works (grammatically) in the same way as a single noun.

For more on this see Noun Phrases‏‎.

Nouns can be divided into major groups within the category. These come from either how the nouns in the group can be used grammatically or the kind of objects they define.

Some nouns can be counted; you can count the number of books in the room and the number of words on a page, etc. These are countable nouns:

There are fifteen books in the room.

There are over six hundred words on this page.

However, some nouns cannot be counted. You cannot, for example, count water:

* There is one water in the sea.

* There are two waters in the sea.

* We put an asterisk before a sentence to show that it is ungrammatical.

Sometimes we use a pronoun to replace a noun in a sentence. We do this so we do not have to repeat the same words again and again. For example instead of saying:

We can instead say:

Brian opened the door, he paused by it, and then he closed it quietly.

In this case, he is a pronoun which stands for Brian.

For more on this, see Pronouns‏‎.

It is easy to see and touch a book and because we can see it and touch it we call it a concrete noun. Sometimes, however, it is impossible to see or touch a noun. For example, these are also nouns but you cannot see or touch them:

We call these abstract nouns and they refer to concepts rather than objects.

We also talk about proper nouns which are the names of people or places:

In English proper nouns are capitalized.

For more on this, see Proper Nouns‏‎.

Sometimes we want to use a verb‎ as a noun. For example, in the following example ski is a verb:

We can take that verb and add –ing to the end then make it the subject of a sentence‎ where it becomes a noun:

Skiing is my favorite sport.

When we use a verb as a noun we call it a gerund‏ (or sometimes a verbal-noun).