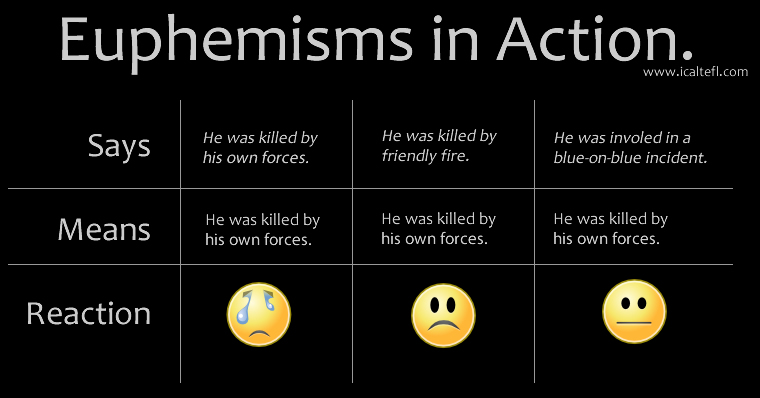 Using a euphemism is a way of hiding something bad, offensive or tasteless behind a good word or phrase.

Euphemisms are used essentially to put a good spin on something. Instead of presenting the naked truth, they sugar coat it a little so as not to offend anyone, or to make a better impression, or to avoid hurting someone’s feelings.

How and when we use them depend on the circumstances. For example, suppose someone died. You do not want to upset the close relatives so you might say:

I’m sorry to hear your mother passed away.

However, with some friends you might adopt a neutral tone and say:

Did you hear Joe’s mother died?

Sometimes euphemisms are simply used to hide the truth. Famously during the Second World War the British Prime Minister, Winston Churchill, talked about

This phrase suggests people were carefully removed from their houses so they had nowhere to sleep. What he actually meant was bombing German cities to destroy not just buildings but also kill people.

War often gives rise to euphemism, often because the truth is too hard to bear (or even bare). During the First World War soldiers who were effectively driven insane by the carnage around them were

This sounds very strong to modern ears. During the Second World War it was replaced by

This suggests that a short rest, some warm soup and a bit of peace and quiet will be enough to bring these soldiers to full health again (where, of course, nothing could be further from the truth). Finally today this term has been replaced once more and now we talk of

This sounds like a complex matter which is best dealt with by a handful of pills. It is a sterile, medical term which doesn’t really involve human emotion at all.

Euphemisms come in all shapes and sizes.

To avoid using a potentially taboo word, some people might say:

Did you see that a-hole who just cut me up?!
I can’t take much more of the CEO’s BS!

And online you will often come across the acronym: WTF which hides a taboo word.

These can cause problems for learners of English as they don’t really describe what they are talking about. They have to be learnt as new vocabulary:

a lady of the night
the smallest room

This is simply one term for another:

I need a slash.
The old man croaked last night.