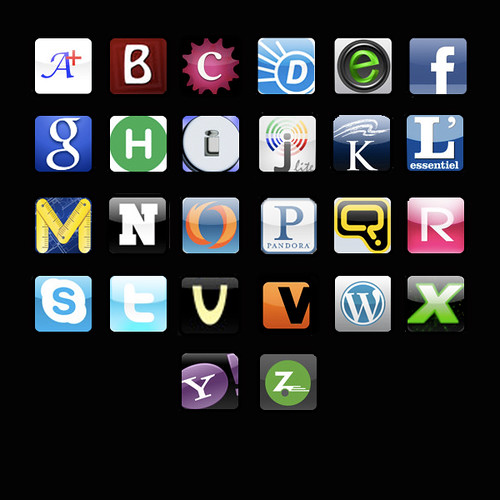 The English Alphabet contains 26 letters. These can be divided into vowels and consonants‏‎.

Every word has at least one vowel sound. When we write them, however, some words do not have one of the vowels above, such as:

Although these words have a vowel sound, they use the consonant letter y instead of a vowel.

Think of the /k/ sound in case and the same sound in Kate.

Think of the different pronunciations of the letter c as in cake and nice.

The English alphabet is a bicameral, that is it has upper case (or capitals):

Where Does the English Alphabet Come From?

Although the history of the English alphabet is a not certain, it’s thought that its earliest ancestor was the Egyptian Hieroglyphic system. Here pictures represented real-life objects. A picture of an ox represented a real life ox, for example.

Later, the picture of the ox became more stylized and looked nothing like an ox. In other words it turned into a symbol or a letter. And as time went on these letters began to represent sounds rather than objects (although sounds related to the pronunciation of the object).

Then around 1,000 BCE along came the Greeks and they adopted a shorter version of this alphabet and, significantly, added in sounds for vowels. Of course next were the Romans who took the alphabet and adapted it for their own use. This is the so-called Roman alphabet we use today and there are significant similarities between the Greek and Latin alphabets.

It’s suspected that the Roman alphabet arrived in England via Ireland between 5 CE and 1,000 CE. The Roman alphabet, incidentally, is used in around 100 languages around the world and is by far the most widespread writing system (although adapted for each language).

A pangram is a sentence which contains all 26 letters of the alphabet. The most famous is arguably:

The quick brown fox jumps over the lazy dog.

There is an informal hunt on the for the shortest sentence which does this; ideally it would be just 26 letters long. It hasn’t quite been reached yet but this is close at 31 letters:

There are some much shorter but often these rely on highly obscure words‏‎, tortured grammar‏‎, or abbreviations:

In English spelling, the most frequently occurring letters are

This is useful to know when playing Hangman‏‎.

For a full list of letter frequencies, see this page.

Why does the alphabet have 26 letters?

There is no logical reason why the English alphabet has 26 letters. Alphabets from other languages have more or less or the same number of letters.

The letters used in English derive from the sounds but there is no real correlation between the sounds and the letters we have. The number of letters is also determined by the history of writing, spelling and printing in English.

Capital Letters‏‎ – when we use them, why we have them…

Vowels and Consonants‏‎. – a look at the difference between these.