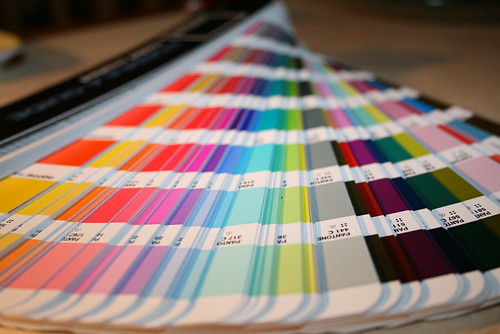 Adjectives are words we use to describe a noun. They usually come before it:

The noun in this phrase‏‎ is book and the adjectives tell us what size it is (big), what color it is (red) and what we think of it (boring). Note that adjectives don’t always give a value or physical description of a noun (as above). Sometimes they are used to clarify quantity in nouns:

Look at those people!

Have you got any money?

Unlike in many other languages, in English adjectives never change their form; they are always the same whether they are talking about masculine, feminine or neuter‏‎ nouns or singular and plural nouns‏‎:

the ugly woman and the ugly man

the ugly football team and the ugly goalkeeper

the ugly dog and the ugly scenery

However, the adjective order‏‎ is important and also their position‏‎, too.

Adjectives can be sorted into different groups according to how they function and what they do in the phrase.

These show possession (ownership) of a noun.

my book, their party, your problem…

For more on this, see the main article, Possessive Adjectives‏‎.

These adjectives specify (or, if you like, demonstrate) which nouns we are talking about:

this house, these people, that book, those cars…

For more on this, see the main article, Demonstrative Adjectives‏‎.

These adjectives refer to a non-specific (i.e. indefinite) number of nouns:

some people, any money, several occasions, every time…

For more on this, see the main article, Indefinite Adjectives‏‎.

These help to define which noun we are talking about:

what time, which film, whose bag…

For more on this, see the main article, Interrogative Adjectives.

These count the nouns or specify their position within a series:

the fifth person, the second fish, the one hundredth million dollar…

For more on this, see the main article, Cardinal & Ordinal Adjectives.

Adjectives usually come before the noun:

These are called attributive adjectives.

However, in some cases they can come after the noun they describe but in these cases they must follow a verb:

The dog is big.

These are called predicative adjectives.

For more on this, see the main article Adjective Position‏‎.